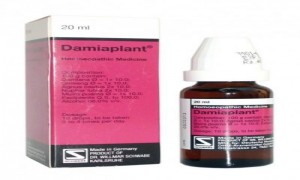 Damiaplant is derived from the famous Diamiana plant which is a fairly small plant that produces tiny, aromatic flowers. Diamiana leaves have been utilized by the native people of south and central America as a tea which has been famous for its aphrodisiac effects. It has developed a reputation over thousands of years as a natural and proven approach to boost sexual stamina, enhance erectile function and enhance orgasms.

Nuphar luteum: Impotency, lack of libido, retracted and relaxed penis, and pain in the penis and testes.

Muira puama: A Brazilian herb is indicated An aphrodisiac, tonic, in impotence, depression, erectile dysfunction & weakness. It is a valuable remedy for impotence.

10 drops of Schwabe Germany Damiaplant Drops to be taken in some water 3 to 4 times per day.